One of my goals for the new apartment was to start a nice little garden on the patio. We have good sun exposure without it being too intense, thanks to the stone walls we have around the patio. So, instead of the typical bar railing, the porch is fully enclosed by this roughly four foot tall barrier (which I recently found out I’m not allowed to put flowers on the ledge of…lame) which blocks some of the brightest sunlight in the afternoons.

I had tried to start a garden last summer to some success. I planted too many seeds in too small of a pot, though, and nothing really came of it all. However, I kept the pots and used them to start the new garden.

I now have twelve plants on the patio, some sharing a larger pot and the rest individually potted. I got a cute little Ikea shelf which was unfortunately a little crooked, so we weighed it down with two stone cat statues we had been looking for a good spot for. Problem solved.

I’m most excited about the basil and aloe plants, I think, because I may actually be able to use them in my daily life. I have hope that my tomato plant, which promises to grow in hot weather, will pan out, but I’ve heard tomatoes are difficult to grow, so we’ll see how that goes. Fingers crossed I can make a caprese salad with the basil and tomatoes in a little while.

The cats were very interested in what I was doing on the porch, especially since they’re not allowed outside. Louis spent most of the time staring at me with his big eyes like he was concerned I was stuck outside. When I came in, they kept sniffing me over and over! 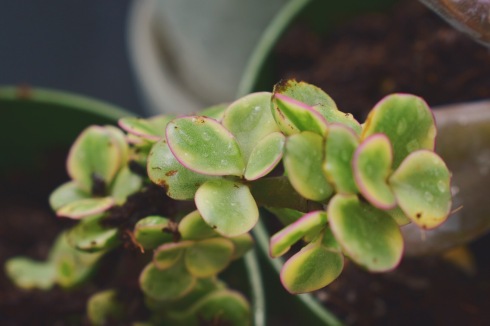 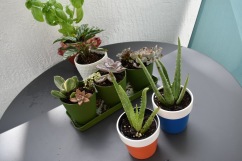 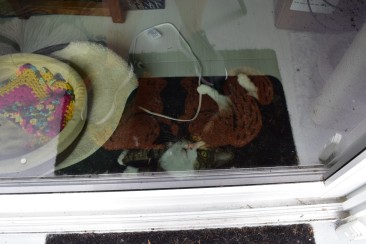